UNDISCIPLINED CMU is the second iteration of a second year undergraduate studio project at the New Jersey Institute of Technology in which a construction is developed as part of a masonry studio. Material is investigated as a given condition and turned into an unexpected object after intense exploration. The resultant object is a concrete construction that, as an education device, opened the possibilities of reimagining and reconsidering the banality of the most typical, and less valued material in the construction industry, by literally cutting it; aiming for an expanded consideration of disciplinary knowledge and industry in the academic setting. 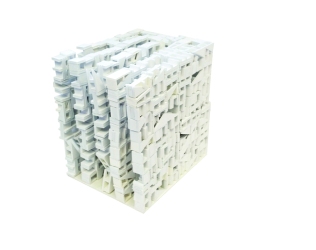 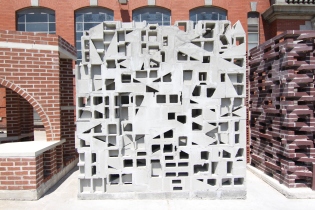 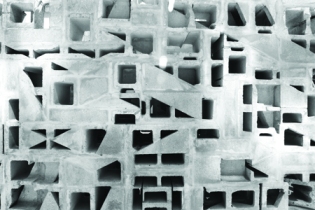 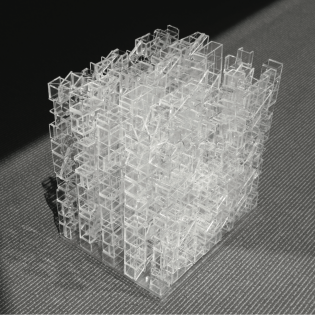 The House Opera project seeks, through architectural innovation, to propose a fertile alternative to the blight binary of neglect versus demolition. The project seeks to explore what might occur when the borders of a house open up to annihilate the borders between art and community, makers and receivers of art, museums and home.
House Opera | Opera House aims to open and produce new possibilities of public engagement for architecture as a discipline and for houses as a built typology, investigating the means by which a formerly vacant house may serve as a node of cultural infrastructure. As historian Reinhold Martin argues, infrastructure is what is reproduced (financial, political or social infrastructures), the House Opera | Opera House is the product and produces communal infrastructures.
The House Opera | Opera House was originated and led by Mitch McEwen when she bought the house and received funding by grants from the Knight Foundation, Graham Foundation, University of Michigan Taubman College of Architecture and Urban Planning, and individual donors from a crowdsourcing campaign with matched funds by Michigan Economic Development Corporation. 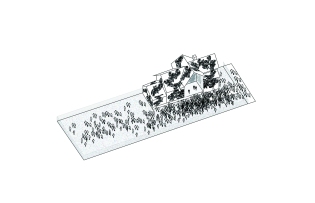 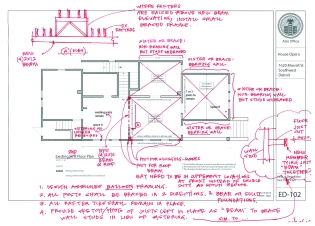 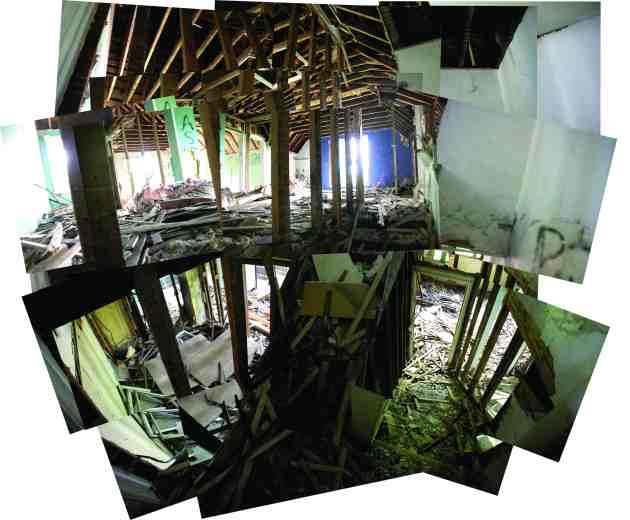 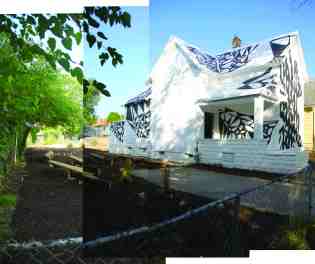 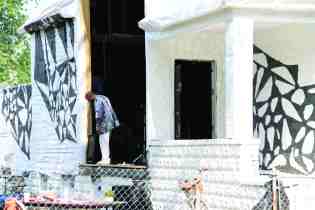 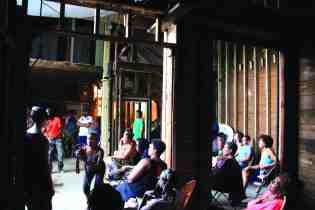 Artist Gordon Matta-Clark Splitting’s house photographs were superimposed in the location where the house stood before demolition in 1974. Re-placing took place on April 2013 in Englewood, New Jersey.

RE-PLACING SPLITTING is part of Destructive Knowledge: Tools for Learning to Un-Dō, a theoretical investigation between docility, knowledge and discipline through the artist’s work. 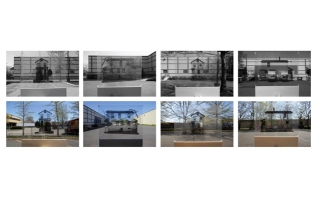 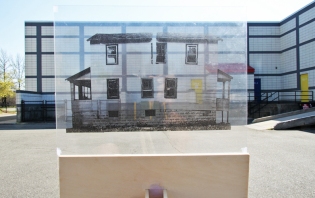 A complement to the 2nd year studios at the New Jersey Institute of Technology students work on a masonry build-mock-up, a competition based project in which students create a masonry construction with the help of masons, typical solid CMU blocks were cut in order to create the space of “staged interactions” within the school environment. The inquiry of the concrete masonry unit, the most typical construction element, offered the opportunity to reconsider a usually overlooked material and its capacities. First prize. 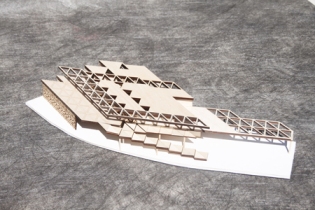 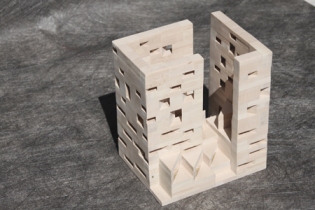 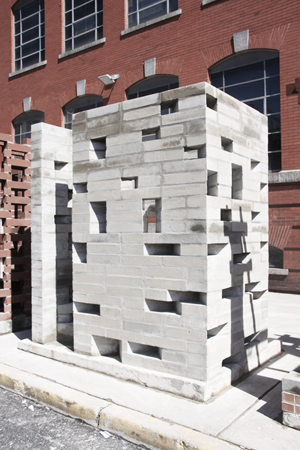 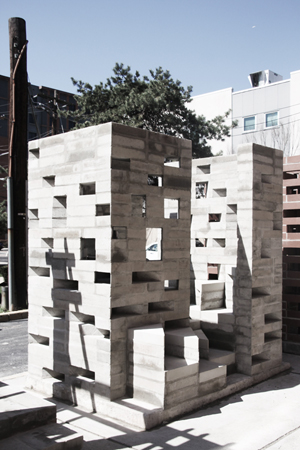 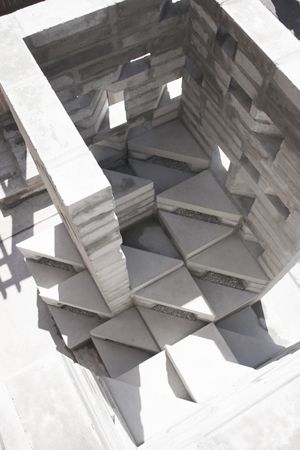 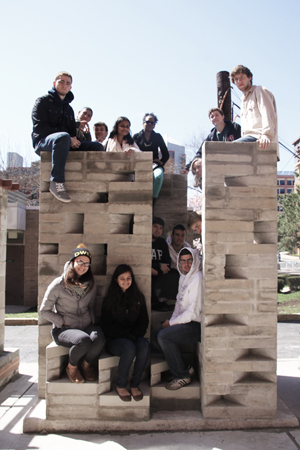 Visiting Splitting was a film screening and conversation held around two films depicting Gordon Matta-Clark’s Splitting work, including the film Visit To Humphrey Street House, a first public screening after revealing the film from the artist’s archive. In discussion with Kelly Baum, Jessamyn Fiore, GH Hovagimyan and Mark Wigley. Event held at the Storefront for Art and Architecture.

More info about the event, including video documentation, can be found here. 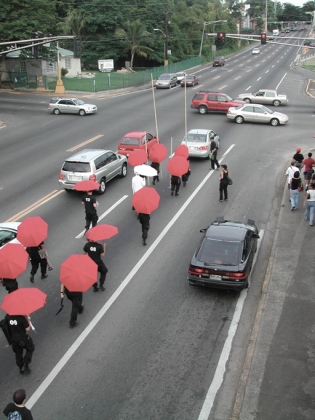 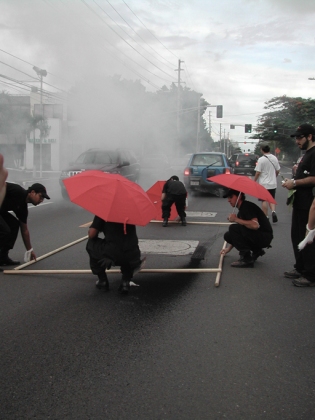 Memory is a vital resource for trying to explain cities. Valparaíso in Chile has been no exception as evidenced by the efforts that made the city a World Heritage Site (UNESCO) after this project began in 2002. Therefore, critical analysis of heritage-related memory could present operational and architectural alternatives in the exercise of articulating historical value. With this premise, the project proposes an alternative for the staging of the city through its “documents of the past,” with a scenery dominated by the transient and imagination as a tool of memory. The city’s geographic amphitheater-like formation strengthens the relationship with the bay or scenario. In this theatrical play of floating objects and dialectical views, memory becomes a strong yet diffuse record of the temporal, becoming the main resource of the project.

The strategy of distancing from the city to intervene from outside raises a dynamic attitude of happening to address the ambitious cultural program for the city. The architecture would transcend its object value, framed in the city’s undeniable landscape. In this sense, the project works on several levels, it appropriates the floating dock structure Valparaíso III as the venue for fall/winter cultural events. Here the activities will occur in a series of pavilions, which would be at this time of the year within the floating dock to safeguard them from the winter tides. During the first day of Spring, pavilions will float and leave the dock to locations in the city shore, to accommodate orchestrated events that will complement the festive coastal living.

The project’s five pavilions could be associated with various expressions of the city. There are four types that accommodate exhibitions, music performances and film screenings. Cladded in copper they seek to acquire the passage of time. Architecture will perform its capacity to provoke and activate the individual memories of the collectivity through time.